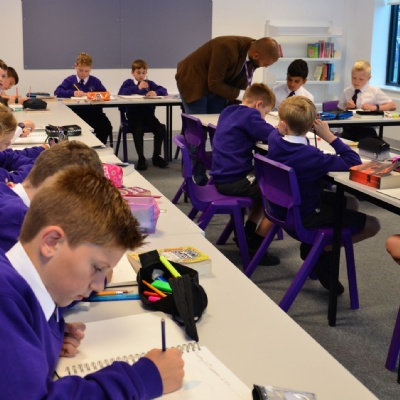 🆕Delighted to have an update from Pix Brook Academy Principal.

Every teacher in the world finds themselves saying the same thing at this time of year: “the summer holidays, when were they?” For those of us who started at a new school this September that feeling is even more profound. It’s always tricky starting somewhere new but when everyone and everything is new it really is a challenge.

Pix Brook Academy opened its doors for the very first time on Wednesday 4th September to its first cohort of Y5 pupils. Everyone arrived in their shiny uniform looking smart. Slightly nervous parents waved goodbye as children entered the new building and were able to go into their new classrooms for the first time. I am delighted that the building has lived up to the expectations and the facilities and fabric of the building are very much 21st century.

Pupils were quickly integrated into the rhythm of the school day and all too soon expectations were established. Pix Brook is very much a values based school and our first assembly focused on the importance of ambition, aspiration and responsibility. Pupils responded brilliantly to the message and were quickly sharing thoughts on how these values can be seen.

It’s obviously been an enormously busy time. After school clubs have been really well attended, lessons have included all the normal activities and all staff and pupils have thrown themselves into the multitude of tasks necessary in a new school with vigour. We now look to establish our sustainable routines and begin an exciting educational journey. If this week is anything to go by its going to be quite a ride.